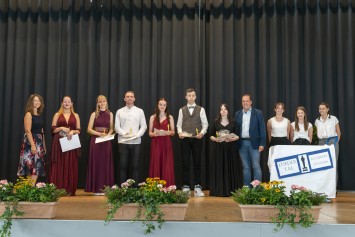 Here is a selection of the winner texts 🙂

Story behind the picture: The big party

In this picture you can see me in the middle, my best friend Tony on the left and my other best friend Carla on the right. I am Leone and it was my birthday.

At 9 o’clock my two best friends stood in front of my bed and woke me up. Furthermore they were singing “Happy Birthday” for me. I turned 16 on this day and I was so happy about the surprise. After I got ready my mum brought us a cake. However it was not the only surprise this day. They told me to get dressed and to put some makeup on.

Next my mum and dad drove me to a beautiful location, where all my friends for me. I stood there in tears, because I have never expected such a beautiful birthday present.

Finally I couldn’t hold my tears back and celebrated with my friends. I couldn’t have expected a better birthday.

Text production: Story behind the picture

In this picture you can see two girls and a boy. They are best friends and do everything together. The boy’s name is Tim, the girl in the middle is Stacy and the girl on the right is Mia. Tim and Mia are both 17 years old and they are from Scotland. Stacy is 18 years old and lived in Scotland for 15 years, but her parents decided to move away so now they live in London, but she has still contact with Tim and Mia.

This picture was taken yesterday at Stacy’s 18th birthday. She invited Tim and Mia and so they visited her. Stacy’s mum and Stacy drove to the airport to pick them up because they arrived by plane. After they had picked them up, they drove to Stacy’s home and celebrated her birthday. They ate cake which was made by Stacy’s mum and then they decided to go on a guided tour because it was the first time that Mia and Tim visited Stacy in London. The last three years they talked only via telephone to each other.

When they arrived at Stacy’s home after the tour, they were all tired so they went upstairs in Stacy’s room. But there they celebrated a little bit longer because they didn’t want the day to end. So they danced, sang different songs and wore party hats. At this moment they took the picture. Stacy asked them to do a selfie because she wanted a memory of this day so Tim and Mia sat next to her and she took the photo.

The day war really great and successful and the three felt happy. They are thankful to have each other and enjoyed the day a lot. Besides they decided to meet more often in future. In two hours, Mia and Tim have to go to the airport because they plane will leave. But before they travel back to Scotland, they are going to eat together in a restaurant because Stacy invited them. They’re all very sad that Tim and Mia return, but also they are very excited to see each other again.

Text production: Story behind the picture

In the summer holidays Emily and Maddie decided to go to their grandparents’ house and stay a week there.  Sadly, her dad couldn’t come because he had to go on a business trip. Her grandma made the food in the kitchen. Thomas went inside and greeted them. He helped them to bring their suitcases inside. They went to eat right after and had a wonderful day together.

Category: The story behind the picture

In the picture I can see three boys named Tyler, Jonathan and Paul. They’re 13, 14 and 12 years old. They are in the streets of NYC on a warm and quite sunny day.

Back in the morning, Tyler called the two other boys to have a bike racing battle. In front, there is Jonathan, on the left behind him Tyler and right behind him you can see Paul. They’re riding really fast on their bikes.

Suddenly, Jonathan loses control over his bike and falls off to the ground. They two other boys stop to look after him. He is not wounded, but the street is really busy and full of traffic. They take their bikes and run from the street as fast as they can. After that shocking, the boys decide to eat ice cream in the park, so they can handle the adrenaline in their bodies.

Category: The story behind the picture

Jake Allister and his train ride

It was the year 2005, somewhere in May, and Jake Allister had an appointment to go to. This appointment was rather personal, so nothing about his job. Jake had a meeting planned with the love of his life, hence why the train ride was so important to him.

All started on a bright Sunday morning in the city of Liverpool, Jake was still in bed, sleeping, and his alarm didn’t seem to go off. When all of a sudden Jake woke up, he realized that he was late for his train ride. He then brushed his teeth quickly, put on some nice clothes and was on his way to catch the train. Since his darling Marina lives in London, he didn’t want to miss the train, as it only departs the same route every two hours. Jake was running as quickly as he could, but thankfully he managed to arrive just in time when the train was supposed to leave. He then got on the train and found himself a seatwhere he could enjoy the sandwiches he had prepared the night before. The train ride went well and without many stoppages.

When he arrived in London, his girlfriend Marina was already waiting for him. Afterwards they went happily to a nearby fast food place and enjoyed a tasty burger. This was a lesson for Jake to always check if his alarm is really on or not. He surely wouldn’t want to miss the train ride!

Category: Story behind the picture

In this photo, you can see two people sitting in a park. These two people are James Jimmy Brighton and Martha Wallace. Now, as you can see, Jimmy is a punker, a troublemaker. And Martha, well, she is a pensioner, currently residing in a retirement home.

Let me tell you a little bit about how this extraordinary companionship came to be. Jimmy is currently 17, he ran away from home a couple of days ago and is, as usual, skipping school. He mostly spends his day with his friend group but most of them got arrested two days ago.

Jimmy is enjoying his teen life very much. He is wild, he is reckless and that’s what Martha wants, too. Martha sneaked out of the elderly home without the caretakers’ noticing. She went to the City Park in London, where both of them live. And that’s where she met Jimmy. His appearance caught her attention and she instantly knew what kind of person he was. So she went up to Jimmy and sat down next to him.

As it turned out, they were in the same situation. They both ran away from “home” and were just enjoying life and having fun. And that’s pretty much how they became friends. Sadly, Martha’s caretakers found her two hours after she had left the retirement home and they took her with them. But Martha told Jimmy where the retirement home was. A couple of days later, Jimmy visited Martha with two of his friends and introduced them to each other. They are actually pretty nice people. The caretakers wouldn’t let them in at first, but Martha came up with the excuse that Jimmy is her grandson, and they believed it.

So even now and then, Jimmy and his friends visit Martha and take her out for a walk. This is rather wholesome, considering that Jimmy never got to meet his grandparents. But they are still friends to this day. Jimmy is planning on taking Martha to a small party next Friday. He knows that she wants to be young again and he is trying to have fun with her so she can enjoy her life as a pensioner.

In this article, we will report about the beautiful and dangerous continent of Australia. As you know, Australia is quite big, but most people live on the coast and not on the inside. The inner part of Australia is called the Outback. There aren’t many people living in the Outback, only some farmers or people on cattle and sheep stations. You might wonder: What about the children?

Yes, they have children on the farm and, yes, they get educated, too. But how? The answer is online learning. They get assignments per e-mail and have to send them back. It’s simple. They only go to school once or twice a year, for exams. But what do the kids do in the Outback? Isn’t it boring? Well, there is not law enforcement nearby, so you can do whatever comes to your mind. Riding a dirt bike – no problem? Driving a car, sure, go ahead! As long as your parents allow it, you can do what you want.

Those are not the only people living in the Outback; there are also the Aborigines. They came to down under about 40,000 years ago. As the name says, they are the Aboriginal people of Australia. And they have different beliefs and values. You probably know the huge rock called Uluru (Ayers Rock). It’s a sacred place for them. They don’t want you to climb it.

When the first settlers arrived, there were about 400,000 to 1,000,000 Aborigines, but today there aren’t as many Aborigines as back then. Mainly because of the so-called “Stolen Generations”. Between 1869 and 1969, the Australian government ordered certain people to steal the Aboriginal kids and educate them properly. Luckily, this disaster stopped in 1969. In 2008, the Prime Minister Kevin Rudd said sorry to all of the Aborigines who had been forcefully taken from their families. I think that’s enough information on the Aborigines.

Let’s continue with the environment and the Great Barrier Reef. There is a big hole on the ozone layer above Australia. That’s one of the reasons why it is so hot in Australia. When you go outside, don’t forget to put on sunscreen. The UV rays of the sun cause skin cancer, be careful!

One of the most famous sights of Australia is the Great Barrier Reef. It stretches over more than 1,500km on the east coast of Queensland. You can’t just swim there, you have to take a boat. If you don’t like scuba-diving or snorkelling, you can also go there in a semi-submersible or a glass-bottom boat. But I can assure you, it is worthwhile going down there.

Alright, I think that’s about enough information on Australia. I hope you have enjoyed reading my article. Have a great day.